Francesco Baracca was born on the 9th of May 1888 in Lugo, only son of Countess Paolina Biancoli and Enrico, a landowner and wine merchant.

He first attended the Salesian Institute in Lugo, then continued his studies at the Scolopian Fathers in Fiesole and finally obtained a classical high school degree at the Liceo Dante in Florence.

Passionate about horse riding since childhood, in November 1907 he became student of the Cavalry course at the Military School of Modena. In 1909, after graduating and being appointed second lieutenant, he was assigned to the 2° Reggimento Piemonte Reale Cavalleria (2nd Piedmont Royal Cavalry Regiment) and moved to Pinerolo, completing his studies at the Cavalry School where he obtained top marks in horse riding, and then to Rome, at the Regiment’s 1st squadron, in September 1910.

Here, Baracca became the commander of a platoon and instructor of scouts and elite riders, taking part also in several equestrian competitions where he achieved good placings. 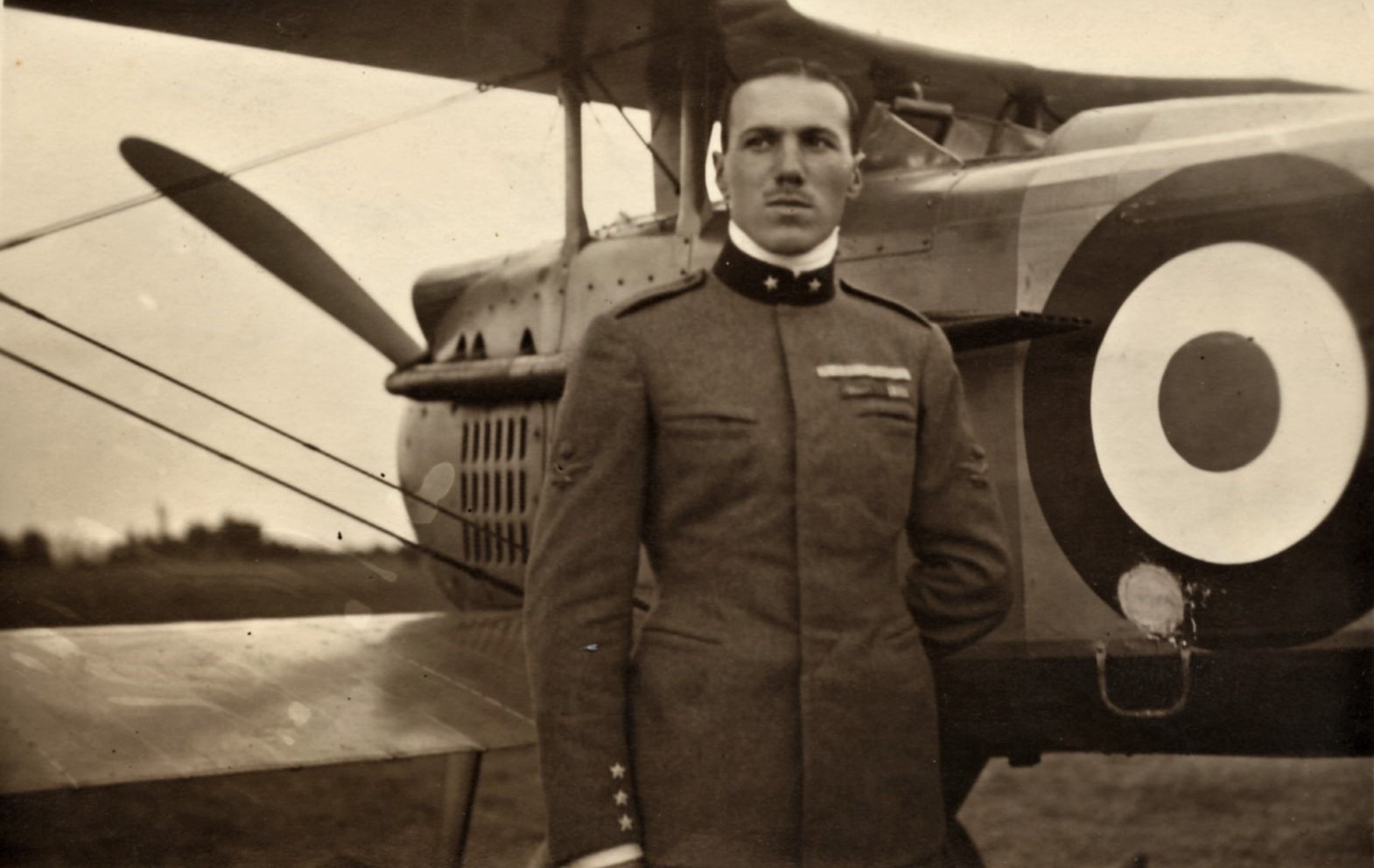 In spring 1912 he applied for obtaining an aviator pilot licence and, together with other colleagues, he went to Reims, France, where he became student at the Hanriot Civil Aviation School in Betheny.

In July of the same year he returned to Italy, moving to the Cascina Malpensa Military Aviation School where he obtained his military pilot licence on a Nieuport monoplane. He was then commanded at the Mirafiori field, before returning to the Milan area, in Taliedo, and being assigned to the 6th Squadron in August 1913. On the 27th of September 1913, he flew over his home town, acclaimed by his fellow citizens.

Endowed with a measured and scientific attitude characterised by continuous training, thoughtful courage and self-control, Baracca was always held in high esteem by his superiors and it is not surprising that, when Italy entered the war in May 1915, his name was first on the list of pilots chosen for training in France, at Le Bourget airfield, on a Nieuport 10 biplane.

Returned to Italy in July, he settled with the 8th Nieuport Squadron (whose name first changed to 1st Fighter Squadron, later to 70th Fighter Squadron) at the camp of Santa Caterina – Campoformido, near Udine, to defend the Supreme Command.

Here he carried out patrol flights and on the 7th of April 1916 Baracca became the first Italian aviator to shoot down an enemy aircraft, the Austrian Brandenburg C.I 6157. Already since the first victory, Baracca showed sincere respect for his defeated adversaries, honouring them and visiting them if they were prisoners.

In late winter 1916 and early spring 1917, Francesco Baracca decided to have a black rearing horse painted on the fuselage of his fighter planes, in honour of the regiment to which he belonged, Piemonte Reale (Piedmont Royal) whose emblem depicted the horse in silver on a red field.

Graduated as an ace in autumn 1916, on the 1st of May 1917 Baracca and other talented colleagues of him, including Fulco Ruffo di Calabria, Luigi Olivari and Ferruccio Ranza were transferred to the newly-formed 91a Squadriglia Caccia (91st Fighter Squadron), the elite formation of the Italian air force, nicknamed for this reason the Aces Squadron, whose command would be taken over by Baracca just a month later, on the 6th of June 1917, and which would later adopt the griffin as its symbol, nowadays still appearing in the Italian Air Force’s coat of arms. Following the disastrous retreat from Caporetto, the 91a Squadriglia Caccia was forced to abandon Udine and move to Padua.

A commander esteemed by his comrades, with whom he was able to create a relationship of affection and trust above rank and social background, he did not shirk any mission and was the last to leave the camp in S. Caterina during the retreat, with the Austrians just a short distance away.

On the 7th of December 1917 he achieved his 30th victory, mentioned in the Supreme Command’s bulletin on the following day and, above all, cited among the motivations for the Gold Medal for Military Valour awarded to Baracca on the 24th of March 1918 during a ceremony at La Scala theatre in Milan, where he was protagonist among others with his friends and colleagues Ruffo and Piccio.

On the 11th of April 1918, the 91a Squadriglia Caccia established itself near Quinto di Treviso where it remained until the end of the conflict.

During the Battle of the Solstice, on the 15th of June 1918, on a mission in San Biagio di Callalta in the province of Treviso, Baracca achieved his 34th and final victory and on the 19th of June, when he went out for a low-flying strafing action over Montello, his Spad VII was hit by the Austrians near the Nervesa Abbey.

The body, burnt in many points and with a penetrating wound in the right eye socket, was not recovered until the 24th of June. Two days later, the funeral was held in Quinto di Treviso and, thanks to a royal concession, in the late evening of the 28th the body reached his hometown Lugo, where it received the homage of the population throughout the whole day of the 29th in the hall of the Patrio Consiglio in the Rocca Estense. On Sunday 30th, in the afternoon, a solemn funeral took place and the body was buried in the town cemetery.

Previous
Next
Manage Cookie Consent
To provide the best experiences, we use technologies such as cookies to store and / or access device information. Consent to these technologies will allow us to process data such as browsing behavior or unique IDs on this site. Not consenting or withdrawing consent may adversely affect some features and functions.
Manage options Manage services Manage vendors Read more about these purposes
View preferences
{title} {title} {title}